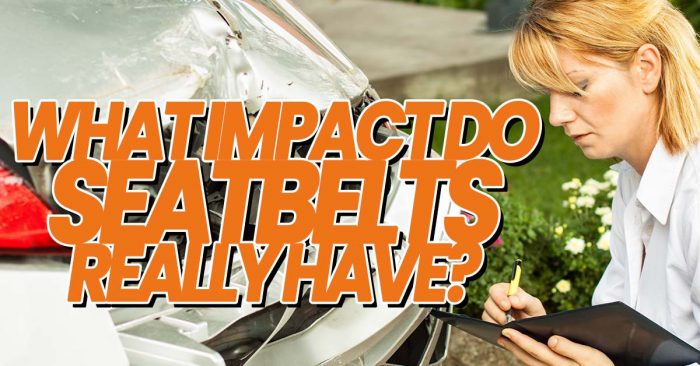 Most of us wear our seat belts today without much fuss. If safety wasn’t a concern, putting that seat belt on was still a better alternative to the constant nagging of the incessant warning bells.

Compliance, however, is saving lives, and in significant numbers. In addition to saving lives, serious injuries have also been reduced through the increased use of seat belts.

Although seat belts were available in vehicles years prior, Federal law mandated that they be placed in the seating positions of all vehicles in 1968. Some states didn’t mandate their use until decades later. In California, for example, seat belts weren’t required to be worn until 1986. One state, New Hampshire, still doesn’t require their use for adults.

The facts, however, seem to speak for themselves. Starting in 1966 and for 8 straight years, traffic deaths in the United States reached over 50,000 annually. In 1972 and 1973, they peaked at over 54,000 each year. Since then, however, almost a half-century, deaths have only exceeded 50,000 in three of those years. Not since 1980 have we had a year with 50,000 or more traffic fatalities. In recent years, deaths routinely range in the 32,000-37,000. This, of course, is still far too many, but it is significantly better than where we were headed, even with more drivers on the road.

While seat belts have not been the sole contributing factors in these reductions, better equipment, airbags and other safety features have played a role, seat belts have had a significant impact. Studies show that when the driver and front seat passenger use a safety belt, the risk of death is reduced by 45%. The risk of serious injury drops even a bit further at 50%.

The facts are in. Seatbelts and other car safety features save lives. If you are not encouraging your family to use them regularly, you may be putting them at unnecessary risk, and may even be contributing to increasing auto insurance rates.

When you contact one of our independent automobile insurance specialist, we will connect with our network of insurance companies to compare rates and coverage. You just may be paying too much and not even know it. Connect with us today for your free auto insurance quote.

What Do You Do With Your Spare Time?

The Art of the Car: Famous Car Designers You Likely Never Heard of

Five Tiny Things You Can Do Daily to Make Life Better

The World of Small Cars

Six Surprising Things You May Not Know About Your Home Insurance