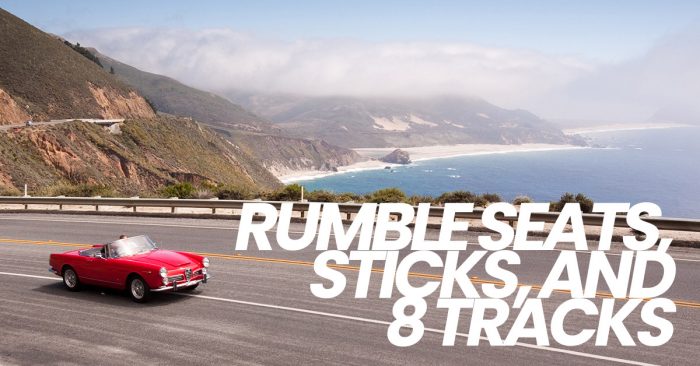 Odds are if you know the definition of unsult (back-handed compliment), Hundo P (100 percent) woke (politically aware) and know that “V” is slang for “very” you are a young Millennial or a part of Generation Z. It seems like every generation has its own language and slang, much of it stemming from the products they use.

For Baby-Boomers, much of this language revolved around automobiles. Here is a quick reference guide for younger readers who may not know what the heck Baby Boomer relatives are talking about when it comes to older cars.

Before MP3’s, CDs and even cassettes, 8-track tapes contained pre-recorded music that could be played in 8-track players in cars. Most cars who had 8-track players featured after-market installations since the trend was relatively short-lived. The bulky tapes were large enough to have miniature full-color replica covers of the albums they contained.

This referred to a fold up seat in the trunk area of a car that was neither comfortable nor spacious. Passengers in the rumble seat often bounced around like in the last car of a roller coaster.

This was a small triangular window placed at the front end of the driver’s and passenger side windows. This window could be opened to better scoop outside air into the car when it was raining. It was a pre-air conditioning way to get better interior airflow.

This was like a low-profile, mini-van-like vehicle, popular with families in the 1950s and 1960s. The rear compartment contained lots of window space and often rear-facing seats. Drivers following a station wagon were often treated to a variety of funny faces and hand gestures from the kids in those rear-facing seats.

Yup, there was a time when families would actually plan a Sunday drive. Just get in the car and, well…drive. It usually went nowhere in particular, but would often include a stop at an ice cream shop.

“Four on the Floor”

A much larger percentage of older cars had manual transmissions, shifted by a ”stick shift”. A four speed with the stick shift on the floor to the right of the driver was often referred to as a “four on the floor”. It was a bit sexier than the “three speed on the column.”

These are station wagons with wood looking side panels and trim. Early “woodies” were made using actual wood, but later models turned to adhesive, wood-look vinyl. You can even spot them on the road today, as some car-makers will produce them every so often. Think “truckster” like in Chevy Chase’s car in “Vacation.”

What hasn’t changed through the years is the importance of carrying sufficient automobile insurance. State minimums may keep you legal, but may not be enough in a real-life accident. Contact our independent auto insurance agents today for a no-cost insurance review and quote.

The Little Known Story of the First Japanese Super Car

You May Never View Your House the Same Again

Down on the Corner: America’s Business Barometer

The Three Ironies of Life Insurance

Factors Contributing to the Increase in Car Insurance Rates

The Value of a Property Manager

Five Fads From the Nineties Worth Forgetting